Pine Cone Goes Where No Pine Cone Has Gone Before 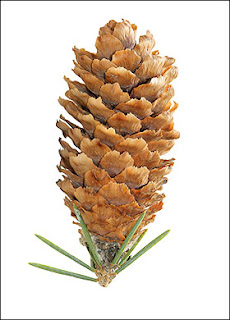 A SEX-STARVED woman has undergone a painful two-hour op to remove a giant PINE CONE.
Surgeons have revealed embarrassed spinster Mirjana Gavaric is recovering after getting steamy with the seedy item in the Serbian capital, Belgrade.

Dr Sava Bojovic explained: “She was lonely and she took a pine cone from a tree and unfortunately it got stuck and she needed surgery to get it out.”

By all accounts, she did have a TREE-mendous time with it though.
Posted by Unknown at 8:29 AM 1 comment:

Pete & Ashlee's happiness? The proof is in the public smooch! 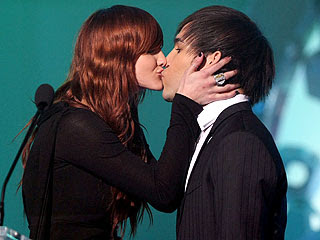 There were rumors that their marriage was troubled. Rumors be gone!!! :)

PS -- That pic is from the MTV Australia Awards this past Friday night.
Posted by Unknown at 1:22 PM 1 comment:

A chopstick lodged in a kung-fu master's stomach during a training stunt 20 years ago has been removed.
Wing Ma, now 40, accidentally swallowed the 21cm-long (7in) stick while trying to condition his body to take pain.

'It never came out the other end. I forgot about it until the other day when I started to get pains in my stomach,' he said from hospital in eastern Wuhan.
Posted by Unknown at 8:15 AM 2 comments:

Couple Gets Married At White Castle

And ironically enough, there last name is McDonald. Weird. Check out their "slider wedding cake!" 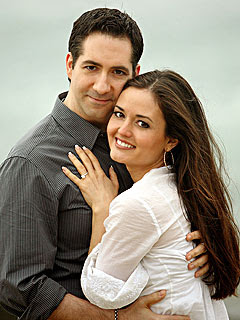 Danica McKeller, who played Winnie Cooper on "The Wonder Years" back in the day, got married this past Sunday. Here she is with her new husband, Mike Verta.
Posted by Unknown at 9:26 AM 2 comments: 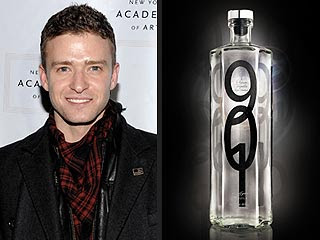 It's called "901." It comes out in May. No worm in the bottle, just the crushed dreams of Chris Kirkpatrick.
Posted by Unknown at 8:29 AM 1 comment:

How much blood does pale little ol' Mary Kate Olsen have in her body??? 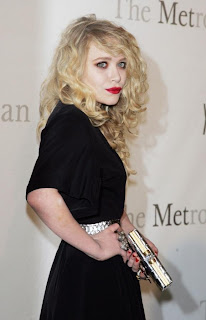 Look at the picture, then answer the poll (at right).
Posted by Unknown at 9:27 AM 4 comments:

Salma Hayek shows off BIG cleavage at the Golden Globes 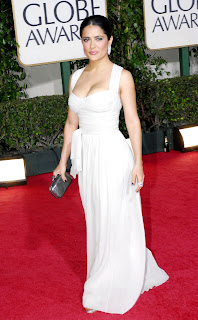 This is the dress that had people talking. Come on! It's the "Golden Globes!" Seems fitting.
Posted by Unknown at 9:05 AM 1 comment:

Woman Holds Up Store, Gets Caught Across the Street Ordering Pizza 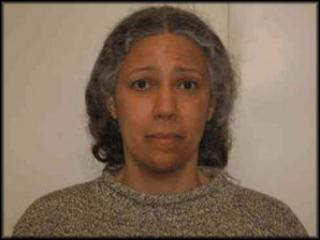 Just after noon on Monday, 48-year-old Mary Gorsuch of Biddeford is believed to have entered Paul's Variety on Alfred Street and demanded money from the clerk, claiming she would "blow [the clerk's] head off" if she didn't comply.

The clerk gave Gorsuch several hundred dollars, and then watched her walk across the street to a pizza parlor. The clerk called 911, gave police a description of the suspect and told them she had just entered the pizza shop.

Officers found Gorsuch waiting for a pepperoni pizza she had ordered. She was taken into custody and charged with robbery.

Despite the suspect's threat, no weapon was located and there were no injuries. It is unclear whether a weapon was shown at anytime during the incident.

Gorsuch was already on federal probation for armed robbery of a banking institution in the Bangor area. Police expect that probation will be revoked.
Posted by Unknown at 8:40 AM 2 comments:

Burglar Shot... then run over a couple times by his getaway car 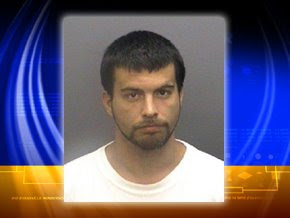 EVANSVILLE, IN (WFIE) - An Evansville man was shot after, police say, he tried to break into a home.

The home-owner said the man broke through the back door, and that's when he shot the intruder, but the story doesn't stop there.

The intruder was then run-down by his own get-away car.

Neighbors said police were on the scene for several hours processing evidence and looking for clues that would help them track down the accomplices.

"I looked out my peephole and saw a man head to toe in blood," neighbor Katherine Vessels said.

Evansville police said it all started at 5:00 Sunday morning when 26-year-old Derek Shaun Clark kicked in the door of Derrick Murray's home on East Riverside Drive.

Police said the suspect entered the home and told the victim he was police.

Murray said he could tell from the tone of his voice something wasn't right.

"They were talking in street slang, so I ran to my bedroom to get my rifle and as he came in with his hand-gun drawn I, I just fired at him," Murray said.

Police said Clark stumbled out of the house leaving a trail of blood behind him.

He attempted to get in his get-away car, but neighbors said he never made it inside.

Vessels said she now fears for the safety of her children, and is considering moving out.

"It just blows my mind that that would happen right in front of my house like that," Vessels said. "I have three kids, I wouldn't want that around anybody's kids."

Still shaken up, Murray said he's here to stay, and also said if those crooks come back, they better beware.

"I think a family man is the most dangerous person because they've got more to lose like I do," Murray said.

Clark is in intensive care at St. Mary's.

Detectives said they will release an official statement regarding Sunday's shooting on Monday.
Posted by Unknown at 8:15 AM 2 comments:

Man Busted For Keeping Pet HYENA In His Backyard 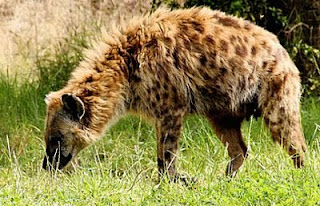 MYRTLE BEACH, S.C. -- A South Carolina man has been cited for having a hyena in his backyard.

The (Myrtle Beach) Sun News reported Wednesday that the year-old hyena named Bubbles has been moved to Alligator Adventure in North Myrtle Beach.

The animal's owner, 26-year-old Nicolas Petock, was cited for owning and displaying a wild or exotic animal after police went to his home last Friday and saw the beast. It had been housed in a chain link pen that had a dog house in the center.

Petock told police he brought the hyena from Texas.

A message for the man was not immediately returned Wednesday. A police spokesman didn't know whether Petock had retained an attorney.
Posted by Unknown at 6:08 PM 2 comments:

BARDSTOWN, KY (WAVE) - The man wanted for an unusual bank robbery in Bardstown is now under arrest. According to Bardstown Police, 78-year-old William Rucker is the senior citizen who held up the Town and Country Bank Friday morning.

Police say Rucker went through the drive-thru, sent a teller a package with a note saying it had a bomb inside. The package was safe, but investigators say Rucker still got away with some cash.

Rucker is now charged with first degree robbery and theft by unlawful taking. He is being held in the Nelson County Jail while awaiting arraignment.
Posted by Unknown at 7:35 AM 1 comment:

Nicole Richie This Past Weekend 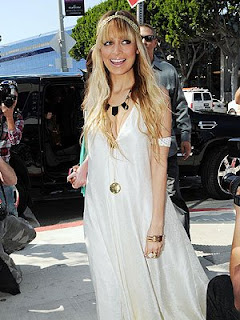 She's pregnant again... and I think she is the prettiest girl in Hollywood right now! What do you think?
Posted by Unknown at 2:35 PM 2 comments:

Boy, Struck By Lightning, Now a Healer. Drink His Potion! 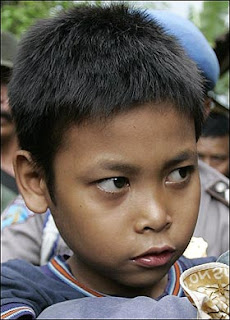 A BOY of nine is being hailed as a “Messiah” after allegedly performing miracle healings.
Villagers claim Mohammad Ponari has cured raging fevers and debilitating illnesses — and even made a mute boy talk again.

At least 5,000 pilgrims a day now flock to be treated with Mohammad’s tonic — made by dipping a “magic stone” in water.

But Muslim leaders in Indonesia want to shut his “clinic” after four people died in a stampede.

The lad is said to have discovered his gift after he was hit by lightning.

He became convinced that an egg-shaped stone he found next to him had healing powers.

Police chief Sutikno told how he saw Mohammad cure the mute boy in Balongsari, East Java, saying: “Ponari shook him and they started fighting, then he began to talk.”
Posted by Unknown at 8:15 AM 3 comments: 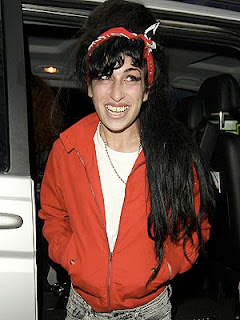 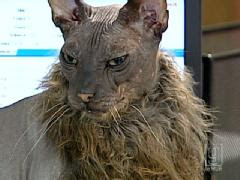 EXETER, N.H. -- A cat aptly named Ugly is attracting a lot of attention at an Exeter vet clinic, where clients say they can't take their eyes off his striking appearance.

The cat's full name is Ugly Bat Boy. He's bald in most places except for flowing fur on his chest, and he spends his days on a warm computer at Exeter Veterinary Hospital, reported WMUR-TV in Manchester, N.H. Bat Boy has become something of a local star.

The cat's striking appearance is normal, for him. He was part of a litter of four with a sister that looked just like him. That kitten died at only a few weeks old, but that was long enough for Bassett to become enamored with Bat Boy.

"The owner knew that I liked the way the sister looked, and I came in from lunch one day and this cat was sitting in a cage, and the owner said Dr. Bassett liked this cat, so that's it," Bassett said.

Workers said many people who come into the building can't really believe what they're seeing. But they said despite appearances, Bat Boy has a nice disposition and real inner beauty.

"The impression from clients that come in is he's not real because he just sits so still, and when he does move, he scares them, but they think he's mesmerizing," Hartnett said.

The office staff was getting so many questions about the cat that they put up a couple of fliers saying he's about 8 years old and perfectly normal in every way -- just ugly.

He has the run of the place and all the attention he can handle.

"He likes it here," Bassett said. "He's comfortable. He likes the people petting him. So, he enjoys it."
Posted by Unknown at 3:45 PM 3 comments: